Originally three groups of engraved figures were recorded here in the late 1880s. Only one group remains clearly visible. Another is covered by grass, the third which is still visible, has been vandalised by graffiti.

It is assumed that due to space limitations many figures were superimposed over others. They show the marine animals which occurred in this area (sharks, whales, smaller fish, sunfish, dolphins) and human figures, one possibly being a mythological being. 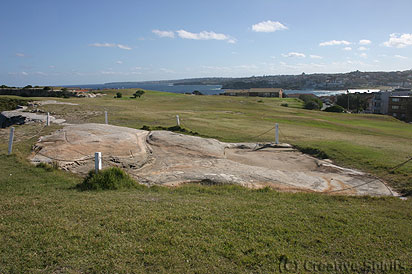 Note that a plaque commemorates that this site’s engravings were regrooved in 1964 in an effort to preserve them. This act was not welcomed by the Local Aboriginal Land Council, which condemned it as “ill-judged conservation attempt” and an “act of desecration” [1].

There is a second rocky outcrop fenced off closer to the cliff edge. It is supposed to show the hulls of two small vessels of the time of British invasion. However, this century’s graffiti has destroyed almost every trace of these petroglyphs, and it is very hard, if at all possible, to detect them.

Nearby are some European carvings which amateur historian Lawrence Hargraves believes to be the work of a Spanish ship crew passing by in 1595.

While near Bondi Beach you can also visit two other sites in the vicinity, one at Ben Buckler, another at Mackenzies Point. 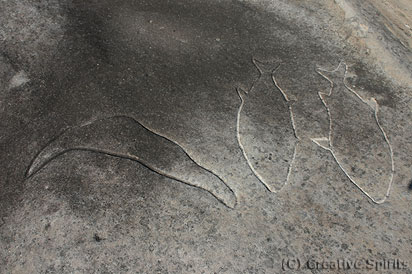 Bondi Golf Course Aboriginal Site. Detail: Two fish and a boomerang. These three engravings are often covered by water, hence the dark colour of the sandstone. These engravings are in the middle of the publicly accessible golf course, next to the large chimney of the sewerage treatment works.

Catch a train or bus from the city to Bondi Junction, then a bus to Bondi Beach. Follow Campbell Parade (right in front of the shops), then walk north past the bus terminal along Military Road. When you reach the golf course to your right look out for the chimney for orientation.

The film Who Paintin’ Dis Wandjina? examines the impact of hundreds of spray-painted images of Wandjinas…

Tracks: Goodbye Old Rolf,  Why, Oh Mummy, Why,  One Dozen Roses,  Half As Much