The myth of the harbour

This is a nicely designed interpretive display, which tells an Aboriginal myth relating to Sydney Harbour. It also provides details about the Aboriginal men Bennelong and Bungaree, a short paragraph on Redfern’s history and a timeline of events.

It is located on top of the Cahill Expressway which crosses over the Circular Quay. 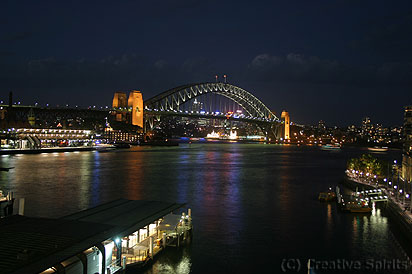 Unfortunately the display was in a bad conditon in December 2004. But since the myth is too valuable to be lost to bad readability I’ve reproduced it here.

The Great Eel at Boora Birra

A long time ago, when there was no evil in this land, the sea was further to the east than it is today, and the place called Boora Birra stood high in the deep valley which it guarded. This valley was the home of the Parra Doowee, the Eel Dreaming Spirit. Now Borra Birra was a special place for women, who, when needed, carried out the ceremony called Butowee there. Every child, when they reached a certain age, was taken to the Boora Birra where they were taught certain things, and received protection from any evil spirits which could enter them and cause them to do evil things.

Because the land between the deep valleys and the sea shore was flat and easy walking, with plenty of food, the people became fat, lazy and forgetful. The men no longer honoured the spirits of the animals they hunted and killed, and they wasted much of their prey, eating only the parts they liked most and leaving the remainder to rot away. And the women no longer taught their children the ways of The People, they no longer paid their respects to the Earth Mother, or gave thanks for the food they received so easily.

The children grew to manhood and womanhood without being taught the laws, and why it is necessary to obey those laws. They formed themselves into bands that roamed the flatlands, destroying the gunyas of the old, stealing fishing spears and hunting weapons, and using them to fight the members of other bands.

The People heard them coming and would conceal themselves high upon the Boora Birra. From this vantage point they watched with trepidation as one band approached the home of the Great Eel guarded by the old warrior, Kamarai. Kamarai heard the noise of an approaching group, and went to welcome his visitors. But he was quickly surrounded by the lawless ones who laughed at his clumsy actions as he tried to avoid the jabbing of their spears.

Bleeding from many wounds, the old man fell to the ground. In a deep pool in the river the Great Eel heard the commotion and heard the cries of help from his old friend. It swam up to the surface of the pool. The lawless ones saw the Great Eel and threw their spears at him in fear as it pulled itself up out of the water. Its great body moved towards its old friend as the last spear of the lawless ones struck its tail.

When it saw that Kamarai had died of his wounds, it cried out in grief and pain, and struck the ground with its great tail, dislodging the spear. The Earth began to shake violently, and a great chasm opened up in the ground, following the fleeing lawless ones and swallowing them as they fled towards the flatlands. Then a storm came in from the sea, and the waves crashed across the flatlands until they reached the cliffs that marked the beginning of the highlands.

“Let this be a warning,” The Great Eel said. “The laws of This Land must be obeyed, and the proper ceremonies must be carried out in the proper manner. It turned to look at the Boora Birra, slowly being engulfed by the waves. “And the Boora Birra will now be a place where the sea creatures take their children to teach them the laws of The Sea. But you may visit, safely from time to time, so that you will remember why the laws must be passed on to the young. And because good lessons can always be learned from evil, this place will be safe for The People, to hunt and to fish, and live and teach the laws.”

The Great Eel slipped silently into the water, and with a splash of its tail disappeared beneath the waves. The People watched the waves, hoping for a glimpse of the Great Eel as it made its way to its new home. One of the children, a young boy, went to the water’s edge, then looked back at his mother and smiled. And spoke in a voice that was not his: “Until we forget again,” he said. “Until we forget again.”

To get to this great vantage point, take either the lift close to wharf 2 or walk from the eastern side of the bridge’s walkway towards the quay.

The Hanged Man and the Body Thief

It is 1860 in Australia. An Aboriginal labourer named Jim Crow is led to the scaffold of the Maitland Gaol in… 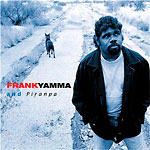 Playing With Fire
by Frank Yamma

The film Who Paintin’ Dis Wandjina? examines the impact of hundreds of spray-painted images of Wandjinas…

Rainbow Spirit Theology is a highly unusual book of theology by Aboriginal theologians in Australia. It is a…