One of the most scenic walks in Sydney

Praised as one of or even the most scenic walk available in a metropolitan area, the Spit Bridge to Manly walk also offers an insight into Aboriginal tradition and culture. Many more sites are hidden in the urban sprawl of Sydney, but this walk is the most scenic and rewarding opportunity for you.

I’ve marked the Aboriginal sites in the map below with numbers which refer to the text. There are many more sites which not accessible to the public.

Tip:This walk is almost 10 kilometres long, so take plenty of water and apply sun protection before you set off. Duration at least 4 hours. There’s a leaflet called "Go Walkabout" available from the tourist information which describes this walk (although in the other direction, towards the bridge). Map of the Spit Bridge to Manly walk. The numbers are explained in the paragraphs below.

This is the only stop where it’s my own theory that Aboriginal history might be attached. It’s too tempting to believe that this rock shelter might have been used by Aboriginal people. Many a visitor has crept into it and left one trace or another, so Aboriginal people might just as well have done so, too. Possible rock shelter. This site would have been an ideal shelter for Aboriginal people.

Here people of the Cammeraygal clan had their meals of shells and disposed of the empty shells. Over time they piled up and are now visible as weathered and bleached shells on the surface. The walking track goes right through the midden, so watch out for shell fragments, which are unusually bright and white. If you come to this rock (called “Castle Rock”) you’ll notice that other walkers have left their marks not only on the rock’s walls but also - if you climb onto the rocky roof - engraved names or initials into the sandstone. This is a place where you can see that it is a natural human desire to use the soft sandstone as a place to leave a trace, be it some hundred or thousands of years ago or today. In this area you’ll pass through beautiful Red Gum forest. 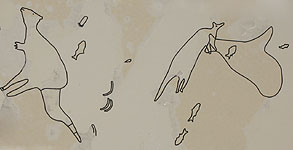 Access to this engraving site is not signposted. If you come from the south, watch out for a bench on your left. You see a large railway sleeper jutting out on the right hand side. If you come from uphill you’ll notice the sleeper on your left first. The sleeper marks the entrance to a large site with some excellent engravings. Signs explain what each engraving depicts and the Aboriginal context.

The image on the right shows a bird’s eye view of the engravings (not to scale). The engravings depict typical elements of Aboriginal life: food like kangaroos, fish and boomerangs or throwing sticks. 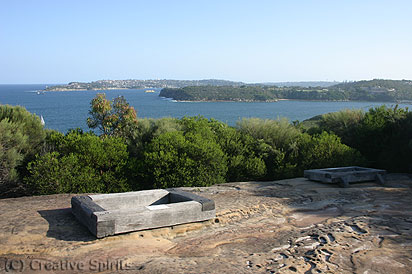 Grotto Point Site. The engravings are protected by massive railway sleepers. Looking south-east you can see Middle Head and in the distance left South Head.

History is not visible here. If you look across the bay you can see Manly Cove. There the British captured Aboriginal people in a desperate hope to teach them English so as to be able to communicate with the Aboriginal people. Recorded names include Arabanoo, Bennelong and Colebee, of whom only Bennelong became rather famous since the Opera House is located on Bennelong Point. But no plaque mentions this story there.

Arabanoo was captured in Manly Cove in 1788. He learnt English and even taught some of his Cadigal language to the British. However, during an outbreak of smallpox Arabanoo died just one year later before he could help the British.

Colebee, a Cardigal man and Bennelong of the Wangal people were captured together in late 1789 after being lured to the boat with fish. While Colebee escaped very soon after, Bennelong remained in British hands for six months. But both men maintained a friendship with Governor Phillip and helped with an early conciliation attempt, at least for the period of Phillip’s governorship.

To the far right of Manly Cove is Spring Cove, where an Aboriginal man speared Governor Arthur Phillip. It was not the only violent incident that took place along this foreshore.

Have a look at this place: A shallow beach, a fresh water supply (on either side of the beach), rocky shelters - wouldn’t it be the ideal camping place? Aboriginal people thought so, too, and created a large midden stretching almost the entire length of the beach. Little remains visible, most of it is overgrown by grass and bushes. But there’s a plaque in the form of a fish, which commemorates the midden. It reads

“You are standing on the edge of a midden, the remains of many meals of shellfish, left by the indigenous people who lived here before white settlement. Some fragments are the remains of species no longer found in these waters. Men and women dived for shellfish or collected them at low tide. Fish were caught from the shore or from canoes, using a spear or a shell hook and line.”

Reef Beach is also a reburial site where ancestral Aboriginal remains have been returned to country in 2005.[1] The remains originated from Reef Beach and nearby Forty Baskets Bay and had been stored in museum collections. For Aboriginal people the repatriation site is a highly significant place. Evidence of past Aboriginal occupation (campsites, a burial and rock art) can also be found within the Reef Beach area.

At this point near a rock swimming pool a sign tells of the Kay-ye-my Aboriginal people who lived here prior to British invasion. It also explains how Manly Cove got its name (although I have also heard a different story: Aboriginal people manly defended their territory).

If you’re coming with the ferry take a bus to the Spit Bridge (ask at the information counter at the wharf). The drivers usually know where to drop you off if you tell them that you want to do the walk. Head down Avona Crescent until you come to a sign pointing into the scrub. Alternatively you can walk straight from the wharf towards the Spit Bridge.

Is Australia a racist country? The question persists, in spite of our multicultural success.Race continues… 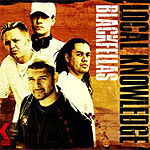 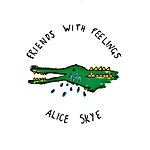 Friends With Feelings
by Alice Skye 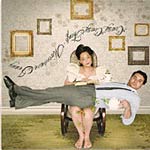