As the name suggests, this is a tragic site. The Jaburara people from the Burrup Peninsula and nearby islands had little to do with Europeans until pearl shell was found at Nickol Bay (which is the seaside area between the two peninsulas) in 1865.

In February 1868, an Aboriginal man was arrested for stealing flour from a pearling ship and chained to a tree by two policemen. That night, a group of Aboriginals rescued him and speared to death the policemen and a pearler camping nearby.

In another account of the events, the policeman was speared because he had raped a Yaburara woman [1].

At Roebourne, 15 pastoralists and pearlers were sworn in as “special constables” to arrest (mind this word!) the leaders of the rescue. 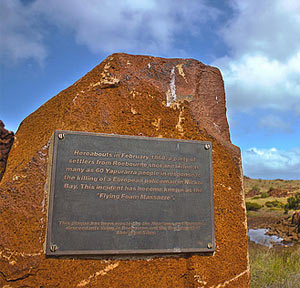 A group of these surprised an Aboriginal camp at the Burrup Peninsula on February 17th and opened fire. A second group shot Aboriginal people as they tried to cross the Flying Foam Passage on logs.

While official sources reported 5 to 10 Aboriginals killed, the settlers and Jaburara people counted up to 60 [2]. Over the following months it is estimated a total of 100 to 150 Yaburara people were killed by way of retribution [1].

An entire tribe, a language, a people were erased.

This site is hard to find as no sign leads you there. There you’ll find a plaque which reads:

“Hereabouts in February 1868, a party of settlers from Roebourne shot and killed as many as 60 Yaburarra people in response to the killing of a European policeman in Nickol Bay. This incident has become known as the ‘Flying Foam Massacre’.”

It is important that people remember this massacre, and learn the history of this Country. It is also important that we protect the sacred rock art here which connects us to our ancestors.—Wilfred Hicks, Elder of the Ngarmula Wong-Goo-tt-oo people [3]

Read about the Myall Creek Massacre, the only massacre where the white murderers have been trialled.

Blood on the Wattle by Bruce Elder informs about massacres and maltreatment of Aboriginal people. It was voted one of the most influential works of Australian non-fiction by newspaper readers in the ‘Spectrum Poll of the Century’.

Make sure to pick up the third edition which includes a new chapter on the massacres in the New England area of NSW and around the Three Rivers - the Hastings, the Macleay and the Manning.

Bill Neidjie was born along the East Alligator River, sometime between 1911 and 1913. He grew up on his…

Against the backdrop of Australia’s tangled colonial and Aboriginal history, Putuparri and the Rainmakers…