Imagine you are sailing on the sea and checking out the coast. Suddenly you notice domes of various size in a patch of land. “A city!” it springs to your mind. Eager to explore this supposed ancient city you anchor and rush to the place you’ve spotted. But what do you find? Limestone pillars!

This actually has happened to William Dampier’s sailors who spotted these structures in 1699. While the name “pinnacle” is quite realistic, the Aboriginals named the area “Nambung” which means “crooked”. It refers to the river which flows through the park during winter. 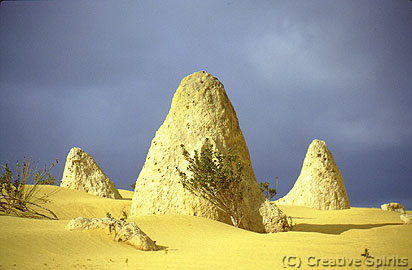 Nambung National Park. A city? No, just the Pinnacles with a dark clouded background.

The Aboriginal people of this region belong to the south-west region of Australia and are referred to as Nyoongar (also: Nyungar, Noongar). Nambung National Park belongs to the area of the Yuat and Wajuk language groups.

Some say that Aboriginal people avoid the Pinnacles. They think they’re fossilised ghosts, a view which might come from the open landscape which is exposed to wind and provides no place to rest. [Cherny, ‘Magisch Reisen’] However, there must have been some Aboriginal occupation as artefacts have been found which are at least 6,000 years old.

No evidence of recent Aboriginal activity could be found, indicating that the Pinnacles were exposed 6,000 years ago and then covered by sand again.

The Nambung River makes a chain of waterholes through part of the park before it disappears into a cave system - two reasons why Aboriginal presence is very likely. Waterholes and caves were common parts of everyday Aboriginal life.

How the Pinnacles formed

Of course there’s a scientific explanation for the pinnacles. Ancient sea shells of an earlier epoch were broken down into lime-rich sands that were blown inland. Winter rain leached the lime from these sands, cementing grains of sand together in the lower levels of the dunes.

With time a hard layer of calcrete formed over the softer limestone below. Through cracks in this calcrete layer water seeped down and leached away the soft limestone.

These channels filled up with quartz sand. As the vegetation dies, erosion sets in and winds blow away the sand covering the eroded limestone. The pinnacles appear [1]. 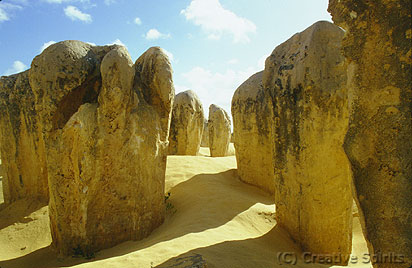 Nambung National Park. It's a dorado for photographers.

Take your time to explore

All the fantastic pictures you might have seen before reaching Nambung National Park were taken in an area which is just one-sixth of the entire park. But the desert area where the pinnacles stand out so spectacularly is only as small as this. Most tour guides will take you here and the only thing that varies is time. I have heard of some poor buggers coming all the way up from Perth only to have 45 minutes for exploration!

I have done the Happy Tour and we had two hours during which we walked about three kilometres through the park and it was just right. You have so many photo opportunities, it’s a true dorado. Some of the limestone pillars resemble comic figures, others a church or turtle. Some are not more than 10 cm high, others tower over 4 m above the ground.

There are still some pristine places on earth, untouched by industrialisation and urbanisation. But for how…

Karroyul is the tale of an Aboriginal girl who, feeling lost and empty after the death of her mother,…